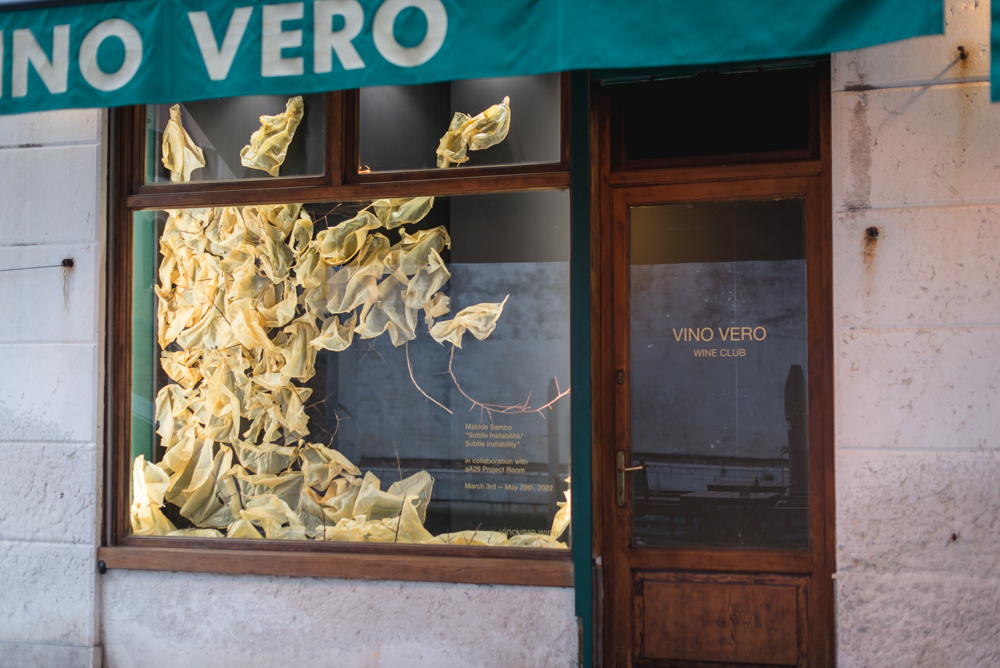 For its third showcase, Vino Vero presents a site-specific work by the Venetian artist Matilde Sambo, whose research explores the complicated relationship between the natural world and the human being, between instinct and rationality. An essential aspect of her artistic practice is the reflection of the concept of “the fragment”, which is investigated on several levels: through sculpture, video and sound. Matilde Sambo’s research generates apparently contradictory concepts that intersect on common points and then merge. The artist often uses extremely ductile and fragile organic materials to represent the importance of change and transformation as fundamental principles of the natural cycle; elements that she then puts into dialogue with materials that are mostly made of metal metal and linked to the sculptural tradition.

Disorientation and narratives of imaginary worlds are themes present in all her works, which are often presented as immersive environments in which all the senses are activated and stimulated. Matilde Sambo says of her work: “What most intrigues me about soy skin is its capacity for transforming: initially it appears moist and elastic so that it can be moulded, folded, laid down or inserted into recesses and crevices. As soon as it is exposed to the air, it morphs, dries out and changes colour. It becomes very fragile, shattering into small pieces just by being touched. Its subtle, organic consistency immediately evokes the skin, revealing its symbolic potential.” She goes on to explain her ideas further: “everything is enchanting, if it were not for the thorns that slowly tear, taking on the appearance of ambivalent white weapons that pierce but protect. Symbolising inner turmoil and at the same time an intrinsic strength that pushes outwards.”

It is no coincidence that this new Showcase opens on 2 March 2022, which in the Christian calendar is Ash Wednesday. “Subtle Instability” by Matilde Sambo here represents a desire for transition, the thorns that pierce the soy skin refer to a religious imagery that here is transfigured and fragmented. An image of suffering and fragility: to gather and transform oneself, is to generate a new strength, a new possibility.

Vetrina presents a series of “boxed exhibitions” curated by Mara Sartore for Vino Vero in collaboration with Lightbox. Every three months internationally renowned artists working on the theme of nature are invited to present their site-specific works in the wine club’s window next to the bar.

Aris reflects the Mediterranean nature of his land

During the opening days of the 59th Venice Biennale, Vino Vero will be taking over a casual and natural wine bar and restaurant at Venice Meeting Point, Navy Officer’s Club at the Arsenale.